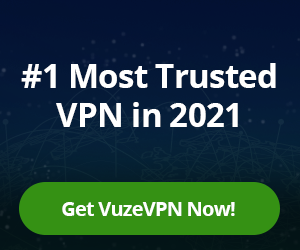 The secret sauce behind Vuze is peer-to-peer technology (often called P2P), and specifically, a protocol called bittorrent. So, what is P2P? What is bittorrent? How does it work and why should it matter to you?

Until recently, it was virtually impossible to send large files, like video, over the Internet with any kind of efficiency. Nowadays, many video sites use a "one-to-many" model in which they deliver content to users from central computer servers. This approach is expensive and generally slow. That's why many video sites limit the length or size of the files. The result is often a grainy, low quality playback experience. Here is what a "one-to-many" system looks like.

In the late 1990s, all this began to change. The world witnessed the development of the first peer-to-peer file sharing models, in which the central server became essentially obsolete. This approach enabled individual computer users to send and receive files without the need for a centralized server. One "peer" literally delivered an entire content file to another "peer" - hence the name peer-to-peer. In the early years, peer-to-peer technologies were primarily used for transferring smaller text and music files due to the fact that the file transfer was constrained to the upload bandwidth constraint of an individual user transferring the file.

In 2001, a new technical standard was developed - called bittorrent - that enabled transfer of very large files using a new peer-to-peer model. In this approach, each computer in the network - referred to as a "peer" or "seed" - has the ability to send or receive pieces of files to others. A user wanting to download a file (a "peer") can literally obtain small pieces of it from multiple computers ("seeds"). In fact, a computer that has only a portion of a file is able to send that portion to others who may need it, even though it does not yet have the whole file. Thus, a computer in the system can both receive pieces of the file from multiple other seeds, and send portions simultaneously. Because users simultaneously obtain pieces of the file from multiple sources, they can get the entire file much more quickly. Put another way, rather than relying on the bandwidth capacity of a single set of central servers (one-to-many), or the bandwidth capacity of one other user (one-to-one), users are benefitting from the distributed computing capacity of all the seeds in the system (many-to-many) - collectively known as "the swarm" (visualized below). How cool is that? 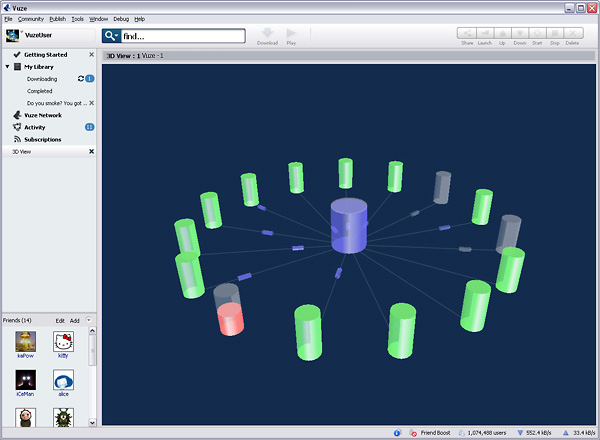 Vuze is proud to be a leading participant in the open source community, and has contributed significant advancements to the bittorrent movement over the years, including innovations in DHT, encryption, intelligent peer selection using Vivaldi, FriendBoost, and Reverse Subscriptions. More significantly, however, the Vuze team has developed and is working to continue to develop an intuitive product where users can easily experience the benefits of these innovations without requiring any understanding these underlying technologies.

Weclome to the world of peer-to-peer and bittorrent technology

An entire etiquette and language has built up around peer-to-peer technology and the bittorrent protocol, so for those of you who are new to it, we thought we'd give you the low-down.

Peer-to-Peer Etiquette, or the "Golden Rules" of peer-to-peer technology

Peer-to-peer technology relies on the community of users to work together and share. For the torrent community to work effectively and efficiently there are some "golden rules". These aren't hard and fast rules, but they're guidelines that people tend to follow to make sure that the swarm (and the community) stays healthy.


The technology behind Vuze is magically cool. Ultimately, however, a community of people like you sharing their content is what makes it all work.